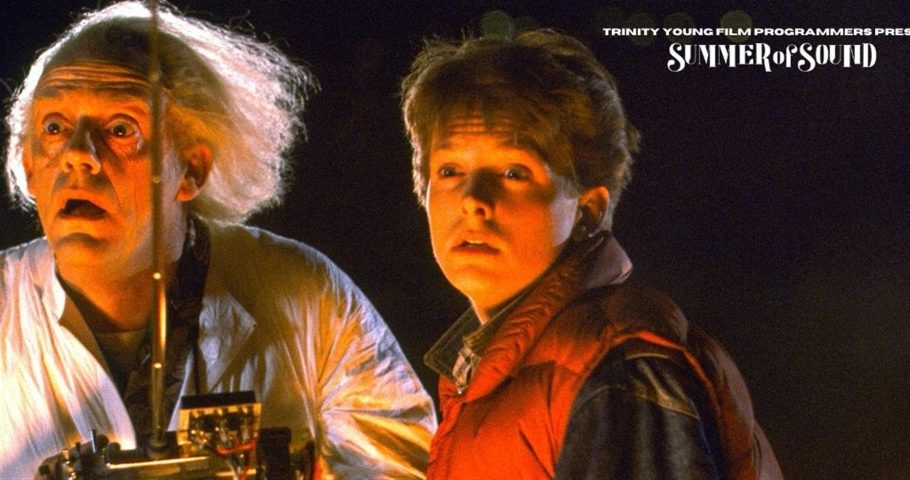 Back To The Future

This film is programmed by the Trinity Young Film Programmers (YFP) and is part of Trinity YFP “Summer of Sound”.

Teenager Marty McFly (Michael J. Fox) has ambitions as a musician but can’t help following his timid father’s (Crispin Glover) fear of rejection. But when his unlikely friendship with scientist Doc Brown (Christopher Lloyd) leads him to travel back to 1955, he comes face to face with the younger versions of his parents. After unwittingly getting between them Marty must do what it takes to ensure they fall in love before he ceases to exist.

‘Entertainment of the purest kind, a picture so tightly plotted, wittily scripted and pacily directed that it’s impossible not to dive in head-first and be swept gleefully along.’ Mark Monahan, The Telegraph

‘Among the plethora of innocent charms on offer, there’s the near perfect script by Zemeckis and Bob Gale which not only negotiates its time travel paradoxes with deft, exuberant wit but invests the light-hearted plot machinations with a seasoning note of honest drama.’ Adam Smith, Empire

For the second film of our ‘Summer of Sound’ we wanted to take our audiences back to the 80s… wait no the 50s… then back to the 80s… with Robert Zemeckis’s classic ‘Back to The Future’. Here we really wanted to explore the different ways in which music can be used in film, from playing a role in the narrative to enhancing the emotional investment and stakes of a scene. Blending both its era defining music with composer Alan Silvestri’s iconic score, this film showcases the highs of both jukebox and original soundtracks to create an exciting, timeless experience.

‘As I kid this film was one of the first times I really remember emotionally resonating with the soundtrack of a film. Especially, near the end there is a particular melody as Doc is sitting up that just hit me back then. It really got me to start noticing sound in film and the different ways it can impact the audience’ – Lizzie, Young Film Programmer Member

The heart of the music of ‘Back to the Future’ is the ‘Enchantment Under the Sea Dance’, the place where Marty’s parents are meant to fall in love and where the film’s most iconic musical number, ‘Johnny B. Goode’, takes place. To do justice to this aspect of the film, and truly immerse our audience in the experience, we’ve decided to hold our own recreation of the dance, right here in Trinity’s foyer! With ocean inspired decorations and period music, come along for a fun 50’s prom themed experience before the showing.

So, why not dress in 50’s attire or outfits inspired by the film and have your photo taken on the foyer stage like Marty McFly? Or maybe you want to dance and enjoy a glass of fruit punch? (It’s included in the price after all!)

The Young Film Programmers are really excited for this event and hope to see you there!