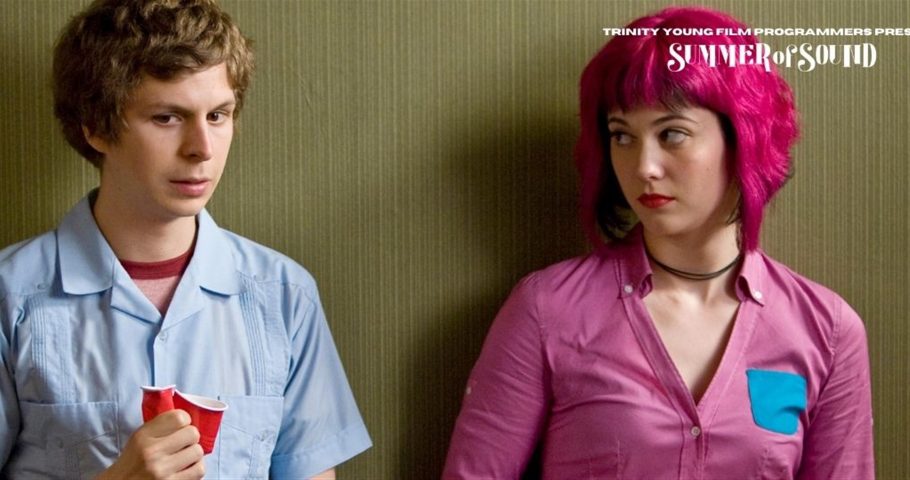 Scott Pilgrim Vs The World

This film is programmed by the Trinity Young Film Programmers (YFP) and is the final part of Trinity YFP “Summer of Sound”.

A bass player and somewhat self-absorbed, Scott Pilgrim (Michael Cera) finds himself falling for the mysterious Ramona Flowers (Mary Elizabeth Winstead). Before he can date her, however, Scott must defeat her Seven Evil Exes. This League of Evil Exes is headed by Ramona’s last ex-boyfriend, Gideon Graves (Jason Schwartzman) and features a variety of odd characters from a skateboarding movie star (Chris Evans) to a psychic powered vegan (Brandon Routh).

‘Scott Pilgrim is a breathless rush of a movie that jumps off the screen, spins your head around and then stealthily works its way into your heart.’ Peter Travers, Rolling Stone

‘Its speedy, funny, happy-sad spirit is so infectious that the movie makes you feel at home in its world’ A.O. Scott, The New York Times

‘Scott Pilgrim VS The World’ is one of those films where the sound and the music elevate the experience to a whole other level. Edgar Wright’s usual creativity when it comes to mixing his visuals with sound are on show here, as he takes the feel and style of comics, videogames and the early 2010s and manages to seamlessly blend them into this crazy ride that leaves you yearning for more. And this is exactly why we chose this awesome cult classic to end the season with a bang.

‘I first watched “Scott Pilgrim” about a year ago and cannot begin to count how many times I have rewatched it since then. Wright is one of my all-time favourite directors and always delivers with this other level of sound use in his films. Its not just those big crazy fights or performances, but also the little touches that may go unnoticed on a first viewing that make this, in my opinion, the perfect end to the YFP’s “Summer of Sound”.’ – Lizzie, Young Film Programmer Member