In our most ambitious and exciting Christmas season yet, Trinity present two world premieres and one absolute classic. One theatre, one cast, three shows and something for everyone this December.

The major project is The New Musketeers, a brand-new comedy set in the world of The Three Musketeers… sort of. When a shipwreck leaves the musketeers lost at sea, their hapless servant’s decide to don the iconic uniforms and head for London. 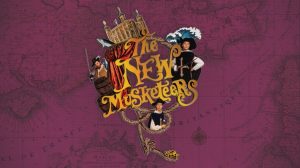 Will they fool the king?
Will they save the day?
Will they even work out which end of the sword to use?!

The New Musketeers is a rip-roaring comedy adventure with brilliant music, terrible sword fighting and magical designs from Tony Award® winning set designer, Nigel Hook. Don’t miss this truly world class production on our doorstep brought to you by many of the minds behind the world-conquering comedy The Play That Goes Wrong.

“These guys are hilarious, if you’re looking for a chuckle with the family this Christmas, look no further than this!” – Jonathan Sayer, artistic director of Mischief Theatre

Trinity has always aimed to entertain everyone and whilst The New Musketeers is suitable for kids 6+ we have made sure there is something for even the smallest theatregoers too. Winnie Southgate’s new play for young audiences is sure to fill the spot.

Zany, interactive and downright joyous, The Aliens Who Saved Christmas will have your little ones entranced as they (alongside our lovable, bonkers characters) help the elves in the North Pole build presents in time for Christmas Eve. The theatre say that the show is suitable for ages 2 and up but funny enough to engage those much older. With only 7 performances, we would advise booking that Christmas treat early.

Last but by no means least is an absolute nostalgia fest, the theatrical equivalent of curling up in front of the fire with a good book. 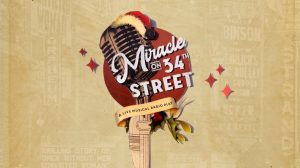 Trinity presents a live musical radio play version of the classic story, Miracle on 34th Street. Peppered with Christmas carols in stunning four-part harmony and all backed by live piano accompaniment, you’ll watch in awe as seven actors perform every character, and live sound effects are created in front of your eyes.

“I could not be more thrilled with this festive offering. It is hard at Christmas to find the right balance to ensure we have something that everyone will enjoy but I really think we’ve managed it this year. Winnie’s play for young people is electric fun and I just know toddlers are going to go wild for it. The New Musketeers has been a labour of love for myself and the other three writers for almost four years now and I can’t wait to let audiences experience it. It’s going to be an absolute blast – think Blackadder meets Father Ted. And Miracle on 34th Street makes me feel all gooey inside every time I watch    it – perfect!”

As if that all wasn’t enough, we are also offering a few one off events like Olivier Award Winner Guy Masterson in his one man re-telling of A Christmas Carol, a LIVE broadcast of The Nutcracker from the Royal Opera House, and a special Christmas edition of their monthly Comedy Club.

So get on down to Royal Tunbridge Wells this Christmas and make great memories at Trinity.

The Aliens Who Saved Christmas · ALL TICKETS £10

Christmas Cracker, Show Stacker Deal · Book for more than one show and get 25% off!