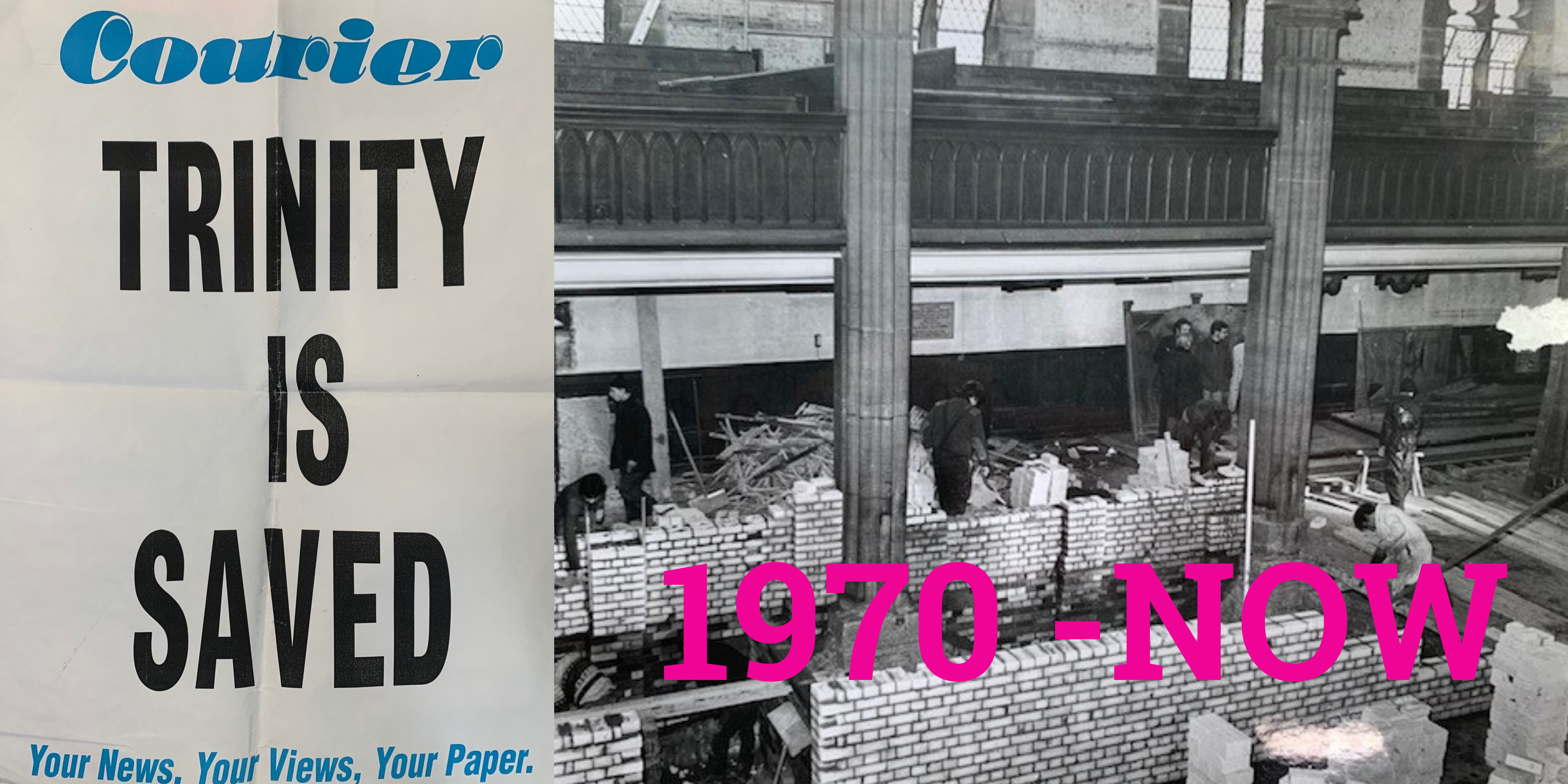 Not all Heroes Wear Capes

But they did presumably wear some very questionable items of fashion – because Trinity had a team of local superheroes come together to save it in the 1970s.

Their valiant and passionate protest meant that although Holy Trinity Church was lost, the building was given a reprieve.

So who were these men and women of steel? And how on earth did they change the mind of the Church Commission and the Diocese – who had already been presented with some potentially lucrative plans to sell the land to residential developers?

When demolition called, the Civic Society answered. Formed in 1959, this local organisation’s mission is to develop and preserve the town for the good of all.

And so, when the local landmark was threatened, members of the society sprung into action. Their campaign – and involvement with other community groups – saw widespread local opposition grow. In response to this outcry the Church Commissioners granted a reprieve. On 14th October 1975, they gave the Civic Society just over year (the deadline was 1st November 1976) to come up with a viable scheme to use the building. Oh, and one more condition – they had to fund it, too.

If the sheer scale of this condition conjurs an image of our 70s superheroes being tied up in the path of a Kryptonite-fuelled laser: don’t worry, you’re not alone. If we move away from superheroes for a second, it’s actually more fairytale-like; a nigh on impossible task like guessing the name of a tiny man while spinning straw into gold.

But relax. What do most fairytales have? That’s right: implausibly happy endings.

In the case of our own fairytale, luckily the Civic Society (and the Tunbridge Wells Drama Club, who it joined forces with to create the Appeal Committee) were not going to let a seemingly impossible task defeat them.

Echoing the efforts 150 years before, this group of men and women came together to create a much-needed addition to the community. And this is how they did it. Enter….

Okay, it wasn’t called that, but it should have been.

In a meeting much like that of 1824, it was decided that what the community needed was a venue for its musical and theatrical groups, and so the idea for Trinity Theatre and Arts Centre was born. With this vision in mind, the members of the Appeal Committee, Chaired by Lord Evans of Hungershall, canvassed, flyered – and held many civilised meetings – to curry public favour and enlist support.

The extraordinary and humbling dedication that these individuals gave – and in some cases continue to give –  as well as their unfailing time, enthusiasm and energy was the recipe for success. By January 1976 the Church Commission approved their idea for a community theatre and arts centre, pending its economic viability.

Cue a LOT of fundraising, and by the deadline of 1st November the team had succeeded. In January 1977 the Diocese had officially granted their wishes – and a lease to the building! 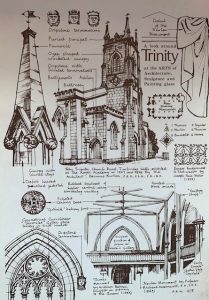 The first battle was won, but the fight was far from over. It was now time to find the funds, time and energy to make the actual conversion happen, and turn a church into a working theatre. The campaigners formed an official organisation to take the project to the next level: the Trinity Theatre and Arts Association. Herbert Story became the Association’s first General Manager (a post he held for a decade), and through him – and the actions of the legions of incredible volunteers working alongside him – the Herculean task began.

It saw many years of work, energy and creative thinking (including using Kent College bricklaying students to build the auditorium while learning their craft!), but what was a shell of a building, in huge amounts of disrepair gradually became a functioning Theatre and Arts Centre.

From Spiritual to Cultural Heart of the Town

This effort was rewarded in 1982 with the first shows that summer. After that, Tunbridge Wells Borough Council became involved, giving a grant to enable heating to be installed. From there, numerous Grants, Awards and legacies followed (alongside an unfailing amount of dedication and work from volunteers, and, eventually, employees). This resulted in new seating, a new kitchen and bar area, and a computerised box office, all of which can be seen and enjoyed today.

For the theatre itself, there have been over 1,000 shows performed since that first, miniature run forty years ago.

Other important developments – in a narrative of rebirth and new life – was the formation of Trinity Youth Theatre in 1989, which underlines the organisation’s commitment to young people. Other important uses of Trinity today include its resident community groups, from art groups to Arts Society lectures, from toddlers and parents here to play, to seniors here to sing.

Finally, the churchyard is also now a garden – a precious green sanctuary to enjoy right in the heart of the town, and a home to the wildlife that we’re committed to nurturing and encouraging.

This year we planted more trees, to honour the Queen’s Green canopy scheme, and our gardening volunteers have ensured that all sorts of plants and flowers are in abundance.  We hope to attract bats and swifts (the pigeons have had dominion for too long) as well as a range of insects and other birds and animals.

Work is still ongoing. The building will always need further repairs, and ongoing oodles of TLC. However, thanks to the National Lottery Heritage Fund, the latest project ‘Open Trinity’ will see the clocktower open towards the end of 2022. It will allow the public to visit the space and climb to take in the view from its rooftop. At the same time, we will launch a year-round Heritage Programme which explores Trinity’s past and looks to its future, with opportunities for conservation and new ways to understand our local history that are accessible and open to all.

Taking our inspiration from the community here over the past 200 years, we will also continue to campaign tirelessly for more funds and more work, giving back to this regal building and uncovering more of its secrets. We’re always looking for people to join us on this adventure, too, so please do come and visit in any way that suits you: from enjoying a performance to volunteering, to a coffee or lunch at our Clocktower Bistro.